In this post I wanted to talk about the idea of creating and exploiting stacked pawns that can occur early on in a game. When I first started playing I opened with the Ruy Lopez as many new players do. It was common, well studied and had a solid set up for white with good attacking and tactical chances. I traded the Bishop for Knight on c6 early instead of keeping pins and pressure on pieces, of course later on I learned of the benefits of the latter. I wont discount the idea of stacking an opponents pawns early on, especially if the player is lower rated. It provides and early weakness and a clear target to work towards from the opening. As you’ll see in this game I was able to stack Blacks pawns early and plant a Knight on e6 waiting until it was clear to attack. Doubled pawns aren’t always a problem, the second game is one I played as Black where I used the stacked pawns to my advantage and involved them into my position and attack instead of letting it become a weakness.

In this game I play White against Owen’s Defense which is 1.e4 b6 where Black’s aim is early fianchetto of the Queenside Bishop aim towards the center of the board. While fianchetto is usually a good plan to protect the Bishop and give it more scope doing so early on concedes the center to White. In Classic style I continue with 2.d4 and surprisingly Black proceeded to fianchetto his Kingside Bishop as well. Once I jumped the Knights into the action it was almost a perfect example of a Classical and Hyper modern take on the opening even if not done in the most efficient way possible. In the game White is able to control the center and continue playing along the Queenside flank as Black’s position becomes cramped and development is halted under the pressure of a central and flank side attack.

The start of any Chess game begins with the development of pawns and minor pieces generally with the aim to control and contest the center of the board. The center is so important because it has the most influence, for example a Knight placed in the center of the board will have more squares available to attack than one on the edge. These two ideas show the basic schools of thought as an objective process in the opening of the game.

The goal of a Classical opening starts with 1. d4 or e4 taking control of the center by attacking c5, d5, e5 and f5 with two pawns. From there the usual course of action is to play a Knight to c3 or f3 which supports the central pawns and also attacks e5 and d5 again. Black typically will follow in a similar suit attacking with pawns and knights initially.

Here the goal of White’s opening is to attack the central squares with minor pieces and prepare the path for a pawn thrust after. The move order would look something like 1. Nf3 2.g3 3. Bg2 4. e4 thus controlling the c5 and d5 squares with more of a long term idea of using the bishop and knight to influence the center.

Now with the overall ideas of the two primary types development we can talk about the nuances of the opening phase. There are some principals to make it easier however these aren’t set in stone and are always flexible.

Lets take a look at the opening phase of a game, this stems from the Ruy Lopez which is a well known and highly studied.

White has two central pawns d3 and e4 as does black e5 and d6.

White has 3 minor pieces developed and black has two with it being black to move.

Typically Black can play Be7 which protects the knight and develops the Bishop. After that point both players have the chance to castle and then continue on with the rest of the game. 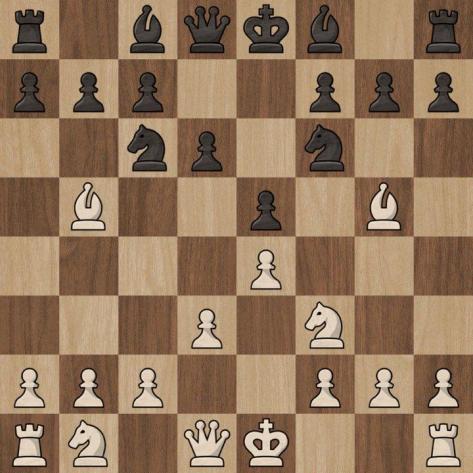