Chess has become one of those things in life that is constant and unchanging, and has allowed me to meet and build a bond with many people along the way. A few people stand out who I played with and I’d like to thank them for having quite an impact on my life. First and for most, my Uncle who continued to play and make time while I was across the country. Deciding to leave home and join the Military was something of a quick decision, I never regretted it and would do it again in the same situation. Being able to get off work and have a connection back home was an important part of my day while I was stationed in Nevada, we continue to play regularly and he is a constant challenge. Throughout my entire Navy career I met and played with people who I will never forget and each person in life and on the board has a unique style and personality.

Where I was first stationed was unique because the majority of the personal rotated every 3 months or so. One of the sailors I played with at SFWPD in Nevada was Bush, we would have games going on during work and would make moves while in the shop between the aircraft events and maintenance jobs. Our games were long and drawn out and very evenly matched, we were both calculating and precise on and off the board. His demeanor and work ethic were iconic and there wasn’t much we weren’t able to accomplish on the job. Another person is Xolani (Cunningham) who picked up chess in a similar fashion to myself, he was very intelligent and useful of the resources he had to figure out problems.  It wasn’t uncommon to see him reading a book or learning something new in his off time. I remember us trying to play blindfolded chess while walking out to the flight line, that is where you call out moves and keep the board in your head, neither of us could really do it but it was awesome none the less.

Gonzales is another who took on a different approach than most people, he was an aggressive and attacking player. As many times in life the board is a representation of characteristics, off the board he would certainly tell you how he felt about something and wouldn’t shy away from anything. I remember playing against him in one game and the attack he played was so strong I was on the defense the entire game until one slip up and I was able to turn the tides. I’d like to talk about some people in the Airframe shop next. My shift supervisor Beaudoin who was all around a great leader in my eyes and the second strongest force I encountered on the board. If I am not mistaken he had some prior experience with Chess before and it definitely showed, he was an all around solid player and that made it difficult to break his positions. All of our games came down to Rook and Pawn end games, we didn’t get to play very much but the final score was even between us. Chief Walker who was in charge of our airframes shop, was another example of a great guy and was very dedicated to his work. I’d like to personally thank him for taking the time to meet and play with me after work, I don’t think many people would do that. It was an honor to meet on the squares.

While in the Airframe shop there was a point where Chess became a unifier, almost the entire shop played together. Clark, Rodriguez, Thompson, Tolman, Oliver, Hoffman, Bridges and Logan all were involved in probably one of the best times of my life. Oliver picked the game up with a gusto, he was an avid reader and naturally I lent him a copy of my “Complete Book of Chess Strategy”. I remember calling mate on Hoffman and there still being one more defending move which he played, embarrassing as everyone was watching. Bridges was the first female I played while I was in the Navy and she was good, we didn’t play many times but our total score was fairly even. Rodriguez used to come to the MWR with me after work and we would alternate between playing chess and ping pong, he was a monster on the pong table!  While at the MWR I also got the chance to play with Jade a few times since she expressed being interested in learning the game. Leaving Nevada was like leaving behind an entire life, one which I will always remember.

Leaving Nevada meant it was time to change stations, I was headed to Lemoore California. Again, I met some people who would have an impact on the rest of my life, like Gautama, Womack, Joiner, Graves, Saavedra, Holtcamp, and Ursua. Gautama was my most relentless challenger, it wasn’t uncommon for him to be seated across from me and hearing him say “Ohhh mah god”, his favorite phrase. He played Chess before growing up in Nepal and he was a dangerous attacking player, similar to the way Tal throws everything at his opponent and lets them try to figure it out. I remember a game we played where he managed to get both Rooks, the Queen and a Bishop attacking a single pawn in the shield in front of my King. Joiner was an impressive opponent for just picking up the game when we started playing, he actually went into the theory and opening lines of positions which made him stand out from all the other people I played against. We analyzed and talked about our games as we played some of them giving me a better understanding of the positions as well. Ursua was also very good, I’m not sure about his experience before we played but he was a good challenge. I remember his fondness for staggering all the pawns making movements and positioning of my pieces difficult.

Graves was my most consistently difficult opponent I ever got the chance to play over the board, our games were grindy and long, he would win and then I would win. He knew opening theory and how to properly play everything to setup the middle and end game, a true adversary on the board if there ever was one. One of the last people I was able to play with during my time in VFA-136 was Womack, she was also new to the game when we started playing but was defiantly determined in what she did I discovered, her determination and commitment in everything I still admire to this day. She picked up Chess quickly and our games were long and slow but had meaningful conversation intertwined in them and therefore were more than just Chess games. We played after work a few times and the watch lined up where we were able to relieved each other and get another game in. A fond memory is when I played two opponents at once, it was Gautama and Womack vs me. I was able to take down Gautama however I couldn’t fight off the attack Womack had with the Rooks and I was in a lost position. I played a few games against multiple opponents with success and I felt as close to Bobby Fischer as I thought I would ever get.

Like SFWPD, Chess became an important part of my life in Lemoore. It was a bond to those around me and I want to acknowledge that I won’t forget those times, things would have been much more difficult if I didn’t have those experiences. I’m out of the military now and Chess is still a formidable force in my life, myself and the community surrounding it the game share a commonality that brings a sense of inclusion. I wanted to write this post because I accomplished a goal that I set awhile ago and I wanted to remember the journey from the beginning to this point. I set my mind to breaking the 1200 rating and I was able to do it in 9 days from 1073. The journey has been great and again I thank everyone for being a part of it. 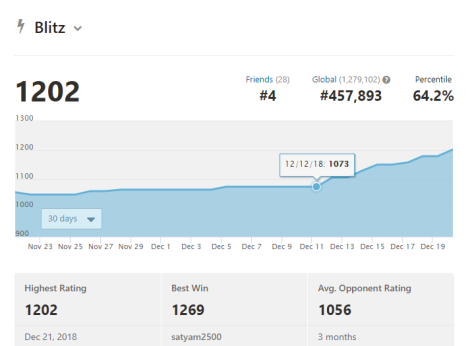