The Benoni has taken on the feelings I have for the Marshall defense, I used to dislike playing against it in general but now I welcome it.  People don’t seem to understand the ideas and weaknesses behind the openings even though they play them and the Benoni is very sharp for both sides if there is accurate play.

Black in this game replied to my push past his gambit pawn by pushing in turn. This fails for a number of reason including Black’s pawn not posing a threat, it’s harder to defend and easier to attack where the White pawn hinders Blacks development, controls center pushes and makes coordination harder. As you’ll see in the game Black is forced to play Knight a6 but is a move behind in actually threatening anything as it’s obvious where the Knight is going. Black abandons his pawn early on and attempts to attack the supports of my advanced pawn, the problem with this is the over extension of Blacks pieces with no support from pawns or other minor pieces. In the position below Black is forced to trade off his primary active pieces and falls into a double attack of a hanging piece and a knight fork picking up a Rook.

Had Black developed and supported the attack better the Knight wouldn’t have been hanging and a developed Bishop would have made castling at response to the fork threat. 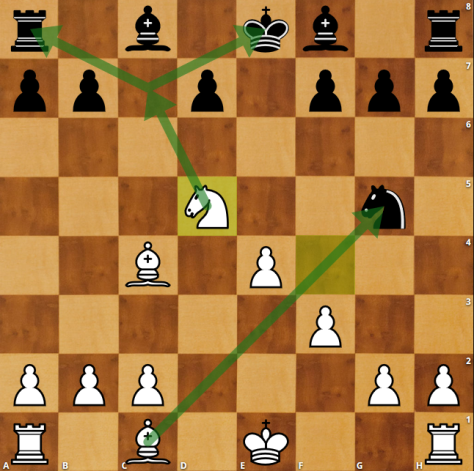